The Medical Examiner/Coroner's Office is asking for the publics help in identifying the John and Jane Doe's found in Santa Clara County.

Below is an unidentified John Doe currently in our office.  If you have any information regarding this John Doe, please contact us at 1 (408) 793-1900​. 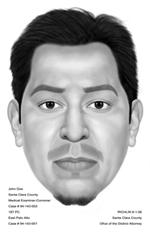 GENERAL INFORMATION: On 05/23/1994, the decedent died at Stanford Hospital being the victim of a homicide. He was found in front of a residence at 466 Bell Street in East Palo Alto after a 911 call reporting "shots fired" near 0045 hours. He is likely a caucasian male, in his early 40's, with black hair, brown eyes, 5'7"-5'9", 157-172 pounds. He was found in clothing and black cowboy boots with a black felt hat (similar to cowboy style), black leather jacket, black leather belt with gold buckle, white button down shirt, black T-shirt, and black denim jeans. The decedent may likely have gone by the nickname "Spider," and his occupation may have been a "drug dealer" per police.